Friday was supposed to be my last day before the baby, but a series of unfortunate events meant that, despite my best efforts, they wouldn't let me in the fence. Since I couldn't get in the fence, I couldn't work, and so was faced with a whole day of unplanned leisure time. I decided that if I *had* to take the day off, I'd use it well. Since I can't reach them anymore, my toes were sorely in need of some attention. Not anymore... 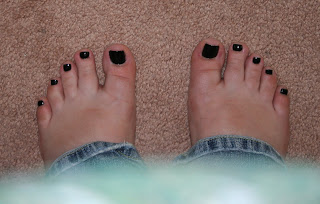 Which is good because the other thing I did was buy these:

These are officially the only shoes in all of Target that would fit my swollen-ass feet, and so will be the only shoes I'll be wearing until the little one makes her big appearance. I've never owned rubber flip-flops before, but I'm loving the colors. And at 2.50 a pop, If I never put them back on, no big deal.
Speaking of the little one's big debut, I had my 38 week appointment yesterday. I mentioned that I hadn't felt her move as much as usual and was treated to a serious scolding about waiting until my appointment to get it checked out. Cue heart dropping worry. Then he couldn't find her heartbeat and pulled in the ultrasound to "cheat a little." Worrying more now. Turns out he couldn't find her heartbeat because the little booger isn't where she's supposed to be. Technically she's in a "transverse lie" which means that her head's on one side and her feet the other, but she moves around quite a bit. In fact, her head moved up about six inches while he was doing the ultrasound. Generally babies get into position around 37 weeks and then don't move significantly, so now we're talking about a repeat c-section. We'll check again next week, but if she hasn't moved down we're scheduling a surgery. If I go into labor before then, we'll likely head directly to the OR. So Little Miss may be making her appearance a little sooner than expected.
Because she wasn't moving much, he also hooked me up to the monitors for a non-stress test. She was sleepy, but moved enough that he felt okay and gave us the thumb's up to go. Now I've got instructions to pay closer attention to her movements and to go straight to the hospital if she doesn't pass the kick count. So far so good.
C reminded me that we had a similar issue with Eli (except we didn't know that he was breech) so I'm not too worried. And to be honest, I'm not too upset about going with what my mom calls the "zipper method" again. This does mean though that I won't be able to try VBAC if we go for a third (although given the history he/she will likely be just as stubborn as her brother and sister).
Posted by Chiconky at 2:34 PM