Today was Eli's school friend party at a local bounce house place. The only party I ever had outside of the house was at McDonalds (remember when they used to do that?) and so I wasn't sure how it was going to work out, especially given that it was a bit more than I'm used to spending for two hours of entertainment. It was TOTALLY worth it. 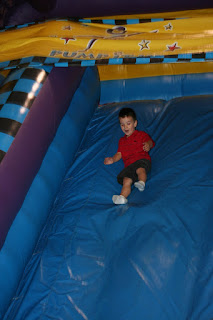 So proud of this kid! I looked over and he was flying down the big slide he's avoided every other time we've come here. 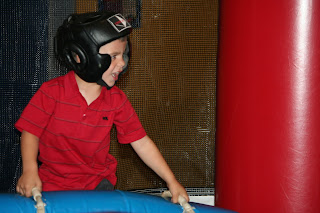 The joust was pretty popular. Like American Gladiators: Preschool Edition 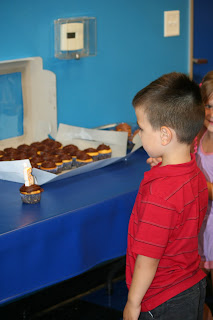 The kids had a blast, I didn't have to clean anything, and someone else made sure everyone was where they were supposed to be. For a socially awkward control freak like myself, it was perfect. And the adults had just as much fun as the kids. 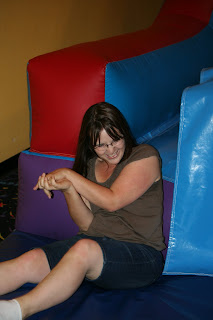 I flew right off the end of this slide. It was pretty impressive.
Posted by Chiconky at 10:02 PM

We had Jack's party there! SO FUN-- and I also few off the end of the slide and actually scratched the hell out of my leg/ankle. It really hurt, but I felt like a big baby when all the 3 year olds were fine! Happy birthday Eli!

First, I got to say that you have one awesome five year old. I really love your boy's personality. I love it when you write, in your witty way, the things he says/does.
Second, you look great in that last picture. I am serious, you look really good.
Third, I can't believe how much L and E have in common. You give me hope that one day L too will go down the Pump it Up slide. And she is exactly the same way with pretend play. She is always very clear that it is pretend, that she isn't really so and so. Doesn't diminish her desire to dress up, nor the fun in the re-enactment. But there really is no blurred lines between pretend and reality with this one. Logical, precise kids are fun. Strange, but again so fun.