Last Christmas C and I decided that, instead of spending WAY too much money on plastic crap we'd be tripping over for the next year, we'd do a homemade Christmas this year. We do this every so often. It started when one especially lean year my mom declared that all gifts would be 1) re-gifted, 2) thrifted, or 3) made. I find that the gifts mean so much more to me if I know that I spent a lot of time thinking about it, making it...Plus in my world, if someone wants something from T@rget they've probably already bought it. Then the lay-offs happened. I got all crazy about money for a minute, then we were able to pay off (!!!) a couple credit cards, and I just have little interest in screwing ourselves so that the kids can play with the boxes and I can freak out about how much stuff we have, have to move, spent money on...

It's been so much fun so far! I've spent DAYS on pinterest, logging ideas and finding eight million things that I want to make. I go to the fabric store almost daily to scrounge through the remnants bin (maybe not such a frugal idea), and I think I've finally got a good plan for the holidays. First up was Sydney's stocking. I got it in my head that all the kids in our family need a homemade stocking. Last year I made my niece one out of a kit and it took for.ev.er. Literally, months. I bought Syd a kit, but I just couldn't bring myself to start it. I didn't even like it that much. Then I realized that there was no law saying it had to be a stocking from a kit. I could go freestyle! Behold! 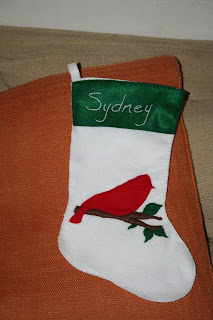 I am so happy with how it turned out! It's a complete original (though inspired from one I found on Etsy) and it took four episodes of Gray's Anatomy start to finish. Including sleep training in between.

I'll keep posting pictures of the projects (and tutorials where I don't think I'll make an ass of myself.) For the gifts for people I know read the blog you'll have to wait until after the holidays. I really am excited, and I hope everything goes as well as the stocking did.
Posted by Chiconky at 6:10 AM

This is absolutely amazing. It actually is better than the pinteresrt one. Please, please tell me how you did it! Especially how you put Syd's name on it. I can't wait to see what else you make.