I am the world's worst teacher. I literally finished this week's reading 45 minutes before class, and I'm pretty confident that my class is going to be awesome tonight. I've also declared that I'm not doing PowerPoints this term. This serves two purposes: 1) the students actually have to pay attention to what's going on in class and 2) I don't have to prep PowerPoints. Win win? 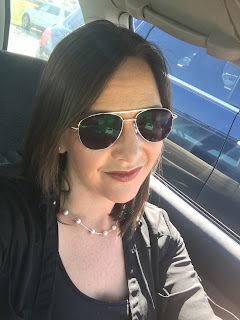 It is 80 degrees today. I am wholly unprepared to completely skip Spring, but I did appreciate the chance to break out my sunglasses

And because there's no such thing as awesome timing, Syd got this ENORMOUS cast on today, just in time for the warm weather. 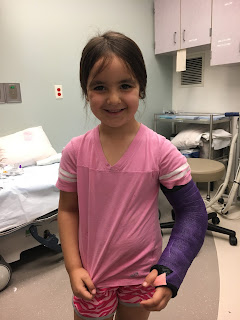 The orthopedist today spent about 6 minutes with us, but without asking he printed out a picture of the x-ray (that I completely regretted not taking in the ER) so Syd could have a picture of her arm. He also reiterated, "It's a very unusual break." We are nothing if not unique, I guess. He was less reassuring about that than they were Saturday, so here's hoping unusual doesn't equal complicated. The break is the squiggly lines on the bottom, if, like me, you looked at it and said "Yay! Nothing broken!" Oh... 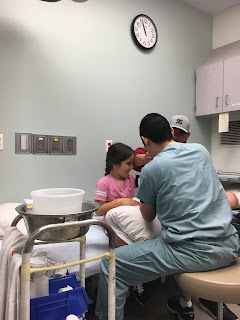 This guy had a whole schtick that Syd loved. However, he kept moving her f-ing arm, which made me clench every. single. time. See above re: not complicated. 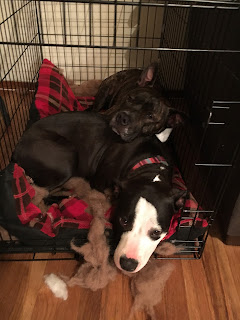 These fucking dogs. Don't they look sweet? They're not! Though Atticus is looking downright angelic in comparison. Scout has boundless energy and very little manners, which is a terrible combination. She keeps randomly peeing in the house, usually in doorways which is super gross, but always on the wood floors. At least Atticus stuck to the industrial tile. And she is chewing up all of C's stuff. So far we've lost a hat, a set of bluetooth headphones, a playstation controller, a back scratcher, every dog toy we've ever bought, a gift box, a dog bed, and my sanity.

So two dogs and a kid who can't run, jump, or wrestle + 80 degree weather, taken with the general disapproval of familicide, led to the worlds worst walk ever. 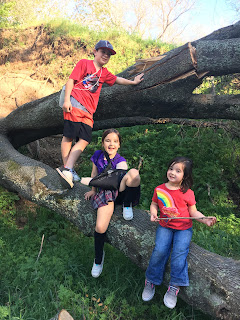 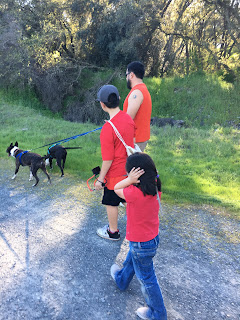 Averson has her ears covered because "I don't want to hear your noises anymore!"

I'm desperately googling "How to entertain a 6 year old with a broken arm" but it appears that "without defaulting to television because it makes kids shits" is not implied. I need help, interwebs. Any ideas? She's can't do any of the extracurriculars that she picked out now and she's getting stir crazy. We've got at least five more weeks left, including the epic 30+ hour roadtrip for Spring Break, and I'm still not drinking (eating disorder February continues!) so I need help!

I have no good suggestions for you. Just empathy. Lots and lots of empathy. How far is your grocery store? Send her on long walking errands?