Sydney lost her second tooth on Friday afternoon, just as we were heading out to our library's annual book sale. Eli didn't lose any teeth until 3rd grade, so this whole "teeth falling out on time" thing is new to us. This one was particularly gross, but Syd was thrilled. AND the Tooth Fairy even remembered to come on the right night this time. So win all around!

A friend had offered a sitting swap with us so that we could go see a non-Disney moving on Saturday night. We had such a lovely, lazy Saturday that by evening-time I was tempted to cancel and rent something off Amazon with everyone. Then I remembered free baby-sitting and the chance to watch something violent/full of swear words and threw everyone in the car. C and I debated between Get Out and Logan, settling on Logan due to timing. (BTW, SO GOOD. I love superhero movies and I love Wolverine and this was such an awesome movie.) I drank a soda and snuck Girl Scout cookies in in my purse and it was a lovely evening.

As we were leaving my friend texted saying that I'd jinxed her when I joked about her needing her newly minted first aid card because Syd had fallen off a step-stool and hadn't stopped crying in 5 minutes. I texted her back "That's why we have spares" because I'm obviously a very nurturing mother. We got there though and Syd was still crying, and her poor elbow was about twice the size it should be. C and I debated for about three seconds before acknowledging that yes, we would be going to the ER tonight.

I dropped C, Eli, and Avery at the house, grabbed insurance cards, tablets, and books (not my first rodeo) and drove to our ER. Thankfully, they shuffled us along pretty quickly, although I will say that ERs are easier with littler kids who don't notice what's happening around them. "Mom, why is everyone running?" "Mom, why do they keep asking him where he is?" "Mom, why is that boy that color?" It was a pretty educational experience. And of course, crappy wifi and nothing good on the tablets so we entertained ourselves with selfies and snapchats, making us look like idiots when we got busted. 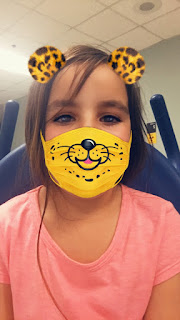 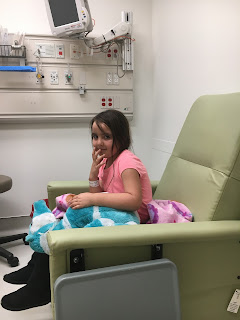 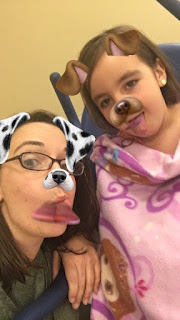 Once they got the x-rays, they confirmed that she had several fractures in her elbow. The doctor likened it to when your screen cracks (which also happened this weekend, gah, but priorities.) So basically her poor little arm has all these little fractures in it.  She's in a splint until the swelling goes down, and then she'll get a full arm cast. That girl really just rolls with things. Right away her primary concern was what color cast she was going to pick out. 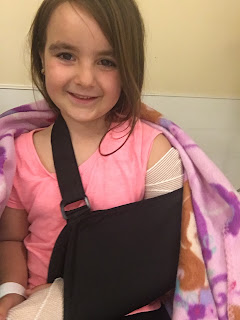 Eli asked if he could be her "assistant" and even went so far as to learn how to put her sling on right. She held a Q&A at Girl Scouts and has started, at the suggestion of the nurse who did her splint, telling people she was in a sky diving accident. I'm now grateful that she'd already bailed on wrestling since obviously that's out for the next little bit. She's still pretty good-natured about it, even when you can tell it hurts, but tonight she stated incredulously, "Geez! This weekend I lost a tooth AND broke my arm!" Thank goodness the weekend's almost over. We're running out of parts.

Oh poor Syd! There have been so many injuries around here too recently (not just us, but our friends). I'd say it's the warmer weather but they've all happened inside!