And in other news, we got a new dog!

We found a new dog! This is Scout. We were starting to get dejected trying to find a good fit for Atticus, and had turned to an organization that helps pair families with rescued pit mixes with second dogs. They sent us to meet a "sweet energetic girl" and it was the worst thing ever. This dog had mange scars and just kept lunching and snarling at Atticus. Poor Atticus couldn't get away fast enough. Leaving there, we thought we'd just "swing by" this shelter that's deep in the downtown area (literally under an overpass) to see this little terrier we found on-line. We got there and she'd been adopted TWO MINUTES earlier. Gah. But then we wandered around and decided to meet this one year old mix. Once she hadn't eaten my children, we decided to let her meet Atticus. The trainer called it "one of the best meet and greets we've had in a very long time." She also called Atticus "well behaved" so maybe take that with a grain of salt. 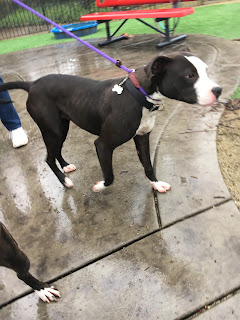 She had to stay at the shelter for another week because she hadn't been spayed yet, which gave us a chance to spend a ridiculous amount of money on new toys and pink glitter collars. She finally came home with the cone of shame and antibiotics for a cold (making my dogs officially more taken care of than my children.) 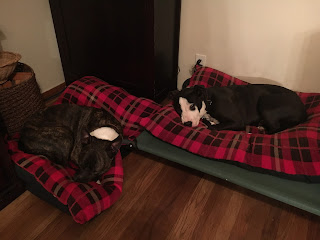 She integrated so easily. The vet thinks that she hadn't been on her own very long because she's so normal acting. She doesn't bark and she hasn't chewed up too much that she's not supposed to. She gets up on the couch like she's allowed (she's not, except when C gets all softy on them.) She intermittently barks at Syd, which is kind of weird, but it hasn't bothered Syd yet. She and Atticus are pretty much inseparable. She stole his bed on the first night and he didn't even glance up. She's since been relocated to a crate for her inability to refrain from pissing in my hallway and eating C's new hat, but they're still pretty cozy and I keep having to pull Atticus out of the crate. 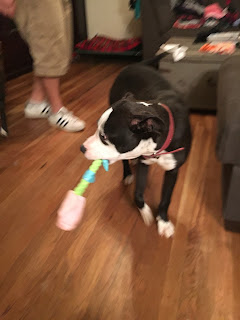 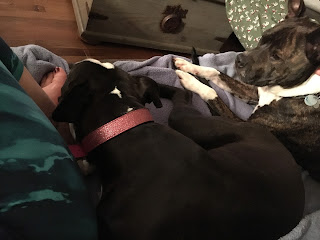 I think maybe getting a second dog was a ludicrous idea. I went from our house being just maybe a touch too small but manageable to not being able to take three steps without tripping over someone. But she is very sweet and Atticus is really happy. Now if she'll just pee outside...