Dude. A whole week? It's not that things haven't been happening. It's just that they haven't really merited their own post. Life is good, work is good, everything's good. There's been massive drama at work because apparently we're doing our job "too well." It's the right kind of problem to have, in my opinion. I sort of fell off of the gym wagon, but jumped on the dairy-free (except for frozen yogurt) wagon. The kids are crazy, as usual, but in the best way. I'm planning Syd's party and simultaneously freaking out about "MY BAAAABY!!!" which of course leads to the "three? We could totally handle three!" thoughts. Moving on...


Eli had his first "ER possible" injury in a really long time this weekend. Turns out those are a lot more complicated with two kids. I stood there for a second unsure of who to pick up first. Sydney, who if left unattended had a high likelihood of sampling garden chemicals or Eli, who was screaming and bleeding? It turned into sort of a hot-lava game, picking up each one and moving them about 5 feet at a time. I would've carried both, but my kids are a lot bigger than they look. He's fine now, and we didn't go to the ER. The advice nurse I called several hours later said "It sounds like it'll be fine, as long as you don't mind that he's a little disfigured." It's just his toe, so we saved a trip. MOTY.


The kids and I took a quickie trip to the coast this weekend. Some days I feel like I should feel guiltier about working, but I think one of the upsides is that I'm forced to make the most of the days we spend together. These kids are so cool. 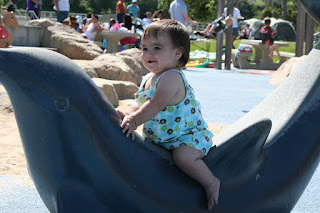 Syd climbed up here herself to channel Whale Rider 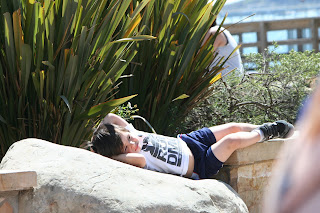 "Mama, can I just go lay over there and watch the people go by?" *swoon* 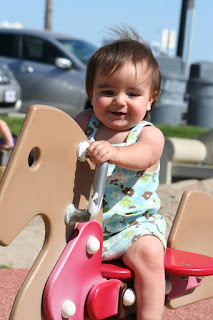 She was all about this rocking horse. She nearly rocked herself right over the front. 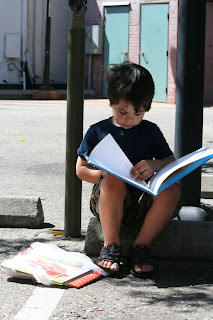 How cute is this?! Love my little reader.

This week my goal is to get back to the gym and get my eating habits under control. I started trying to minimize dairy, but it's not really having as big an impact as I'd like so I've got to try something new. Any suggestions? I think the biggest problem is that as soon as I limit something, I rebel against the limit, so I'm thinking about doing a "free day," as in six days of controlled eating with one day where I eat whatever I want. We'll see how it goes. I'd also like to finish our big family project, which is in a constant state of finishing right now. Pictures soon, I hope.

If you're ditching a food group ditch bread. Not pasta or all carbs far and wide. Just bread.

LOVE the picture of Eli reading-- he looks so grown up!

Have you tried Sparkpeople.com? I totally love it for jump starting a healthy eating plan