I wanted to take Syd to the American Girl Doll Store for her birthday but she wanted an "Art and Pizza Picnic." I was shooting for something casual and low-key, which obviously means that I spent way too much time and money on the damn party. But I have to say that this was one of the best birthday parties we've had. It was simple and the kids had a great time. The adults sat outside sipping lemonade (with and without vodka) and Dominoes catered. Because I'm me and can't do anything simply, we ended up with four separate cakes (God forbid we not have enough!) but other than that it was great. I set up several stations (OMG. Kids love the word "Station" don't they?) where we made ribbon wands, colored, and painted on huge sheets of paper taped to the shed. 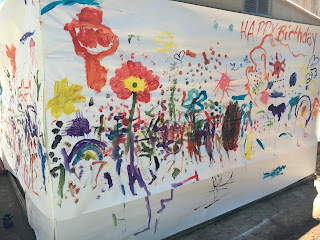 Birthday parties make me a little nervous. I worry about hurt feelings and awkwardness and kids forgetting their manners. I only agreed to let Syd open gifts at the party after we practiced saying "Thank you" no matter what for half an hour. This party had kids from several different circles, so I got all weird about talking to her about making sure everyone was included.

I shouldn't have worried. Sydney was unbelievably gracious. There were NO spats even though there were about 15 kids. Everyone was included and she was kind and hospitable to everyone. She was super polite during the gifts and even managed the "I already have this" issue with grace. And then?! After everyone left and we were all lazing, she took it upon herself to write out her thank you cards. I want so badly to humble brag, but this is all her. So, so proud of that girl. She is so phenomenally amazing.
She technically turns six on Tuesday and we'll celebrate with our traditional breakfast donuts, cookies for class, spaghetti and meatballs, and the leftover 27 pieces of sheet cake (plus a vegan cake for our vegan friends.)

Edited to add this link to when she was OMG so tiny
Posted by Chiconky at 7:00 PM