When Eli was a baby, it became vitally important to me that we get family pictures taken. This was back in the olden days before selfies and we lived far away from family, so there weren't a ton of pictures of the three of us, and it obviously NEEDED to be a professional picture. So I agonized over our outfits (SO much thought went into this to land on matching v-neck black sweaters.) We dedicated a whole afternoon to trekking to the mall to go to JCPenny's (a step above the Walmart studio but not quite as fancy as Picture People) and sit in a back corner smiling for what I was absolutely certain would be the most beautiful and lasting testament of our new family ever. I waited with bated breath while the photographer pulled up our proofs, gazed upon the computer monitor, and then promptly burst into tears. Tears that did not stop for HOURS. I was four months postpartum, crazy, and not prepared for a photograph that would so perfectly capture all of my insecurities.
I wish I could tell her now that eventually not only would family pictures not make her cry, but they'd actually be fun. That she wouldn't freak out when people changed their outfits multiple times at the last minute, resulting in a lot more beige than she'd originally planned but totally ended up working. That no one would pee on anyone else. That she wouldn't have to bribe or cajole or threaten anyone to listen, look at the camera, for the love of God would it kill you to smile? 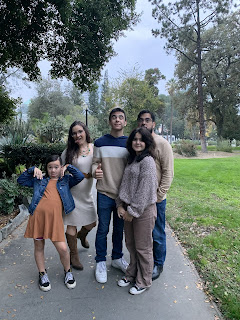 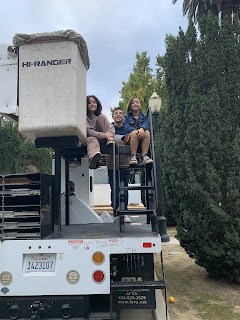 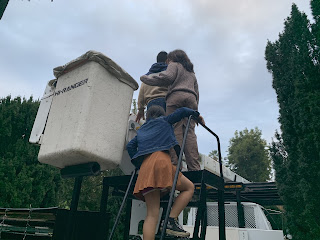 And that the most she'd have to assure the photographer that we wouldn't implicate her if her family ended up getting arrested for trespassing on an unattended city truck. Totally worth it.
Posted by Chiconky at 10:35 AM

I LOVE your dress!