A vegan, an Atheist, and a CrossFitter walk into a bar. How do you know? Because they won't shut up about it.

Over the last six months or so, I've lost nearly 20 pounds, averaged 5 workouts/week, and stopped drinking sodas. It's the first time in my life that my focus has been on being stronger/healthier rather than on being smaller, and it's probably connected that it's the first time that my efforts haven't felt like self-flagellation.

I've been tracking my food, which in the past has been a bit of a minefield for me. Last night I plugged in the Reese's Peanut Butter Cups (full-size, both cups) without a second thought. I'm sleeping better. I'm sore a lot of the time (in a good way) but my body feels strong and effective. My anxiety is so much less impactful and I feel overall more balanced and centered. I'm a huge nerd and sometimes will video myself in the gym. I was watching my latest tape this week and fleetingly noticed that my belly was...not shown in the most flattering light. I noticed it, and then moved on. I didn't obsess over it. I didn't get rid of that shirt or lament that my efforts weren't working or even let that stop me from sharing the video with a friend. I just...noticed.

It's really nice to fit into my clothes in a new way that I think is more visually appealing. What's even nicer is FEELING cute. It's awesome to break 100 lbs on a lift that I've been working on. It's even nicer to FEEL strong. Someone made one of those obnoxious "29?" jokes when they heard it was my birthday (BTW, that's obnoxious and patronizing and I wish people wouldn't do it) and while I did the stupid polite laugh, inside I wanted to say that I feel better now than I did for most of my 30s.

I am so grateful to finally be in a place of feeling good about my body and my health choices and even more-so, I'm grateful that my kids are in a house right now where they see their parents prioritizing wellness and health. 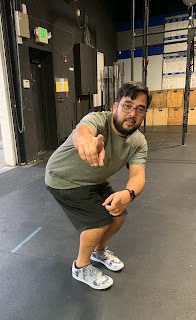 I absolutely love your CrossFit posts, so please keep them coming. (I know I will never do them myself, but I can enjoy your success vicariously!)